”Eat what you need – destroy the rest”

Bio: He has two mouths to feed – his own – and spends most of his time doing it. Since his mouth is usually full, his orders are misinterpreted. Prefers eating non-living things to living things … doesn't like anything that might still be wriggling about after he swallows it. Can refashion digested materials and spit them out as crude missiles. Has powerful sonic stun gun in robot mode. Combines with fellow Terrorcons to form Abominus.


Hun-Gurr I want it so bad I can taste it. Lazy '86 Moive song reference gag for you there. Here we are then, the new Power Of The Primes version of Hun-Gurr. Which doesn't have to that much to be better than the original – just a better range of motion in the arms and job done. So, with that low bar to clear, what have Hasbro brought to the table? An emaciated Combiner Wars Silverbolt, by the looks of things.


Robot Mode: The Combiner Wars Silverbolt mould is good, in so far as it makes for a good torso, but I'm hard pressed to say it makes for an especially attractive robot mode. Hun-Gurr adds some various beast mode pointy bits to give us a bit of interest – the shaping on the legs is particularly nice – and the light and dark grey plastics accented by hot pink work way better than they should. He is blighted by having Popeye arms and no proper gun to speak of. Those Prime armour things can jog on. He looks like he's got his nan's slippers stuck to his arms.


Alternate Mode: The alt-mode is so nearly there. The shaping is there, but it doesn't quite work. The hind legs are very clearly robot arms folded the wrong way, and the forelegs are these pitiful sticks that look more like a car jack than anything he could walk around on. The shaping of the beast necks – mainly there to make the gestalt torso look half-decent – make him look well, fat necked and his tail is buried from all angles by his monstrous back legs. It's got some good design elements but is a bit of mess next to the cohesive design of the original. Basically, you can tell this has been an aircraft (of sorts) cut up into a dragon and looks like one of those alternate builds you used to get on the back of Lego boxes.

Marks Out Of Ten For The Following:

Transformation Design: It is clever to get some more mould-reuse from Silverbolt, I'm just not so sure the end result was worth the bother. I'm sure it keeps costs down though and does help with the Combiner Wars play pattern. 6/10

Durability: Hun-Gurr is all super heavy ratchets and tough plastics, so feels pretty solid. The gestalt head has rubber antennae which I still don't understand. They're not that dangerous. 8/10

Articulation: He's just got a better range of motion in the arms over his original toy. Just goes to show that this kind of thing has always been possible, but there just wasn't a demand for it 33 years ago as it was enough that things transformed back then. 7/10

Fun: The monster mode with its leery necks and opening beast mouths is pretty fun and saves what is a pretty wretched looking thing. Robot mode is pretty average, all things considered and hard to get excited about. The Prime armour clogs are no substitute for a gun. 7/10

Price/Value: The voyager figures offer way better value for money these days, hovering a little over £20 and giving you much more robot for your money. 8/10

Overall: Hun-Gurrr is another disappointing POTP entry. I recall there was a fan out there who'd looked at Silverbolt and shown how a passable Hun-Gurr could be made out of the mould. Hasbro have clearly thought the same. The figure feels like it's got parts missing as a result and has all the hallmarks of something designed for one (or two) other characters hastily chopped and changed into one it definitely isn't. Maybe bigger forelegs would have helped. 7/10

It's kind of a sad attempt all around, isn't it? I like Rippersnapper a fair bit, but all in all I think the Prime Terrorcons were a whole lot neater than their POTP counterparts. Blot turns into a box, Sinnertwin has materials issues, Cutthroat is always falling apart, and then there's their fearless leader: 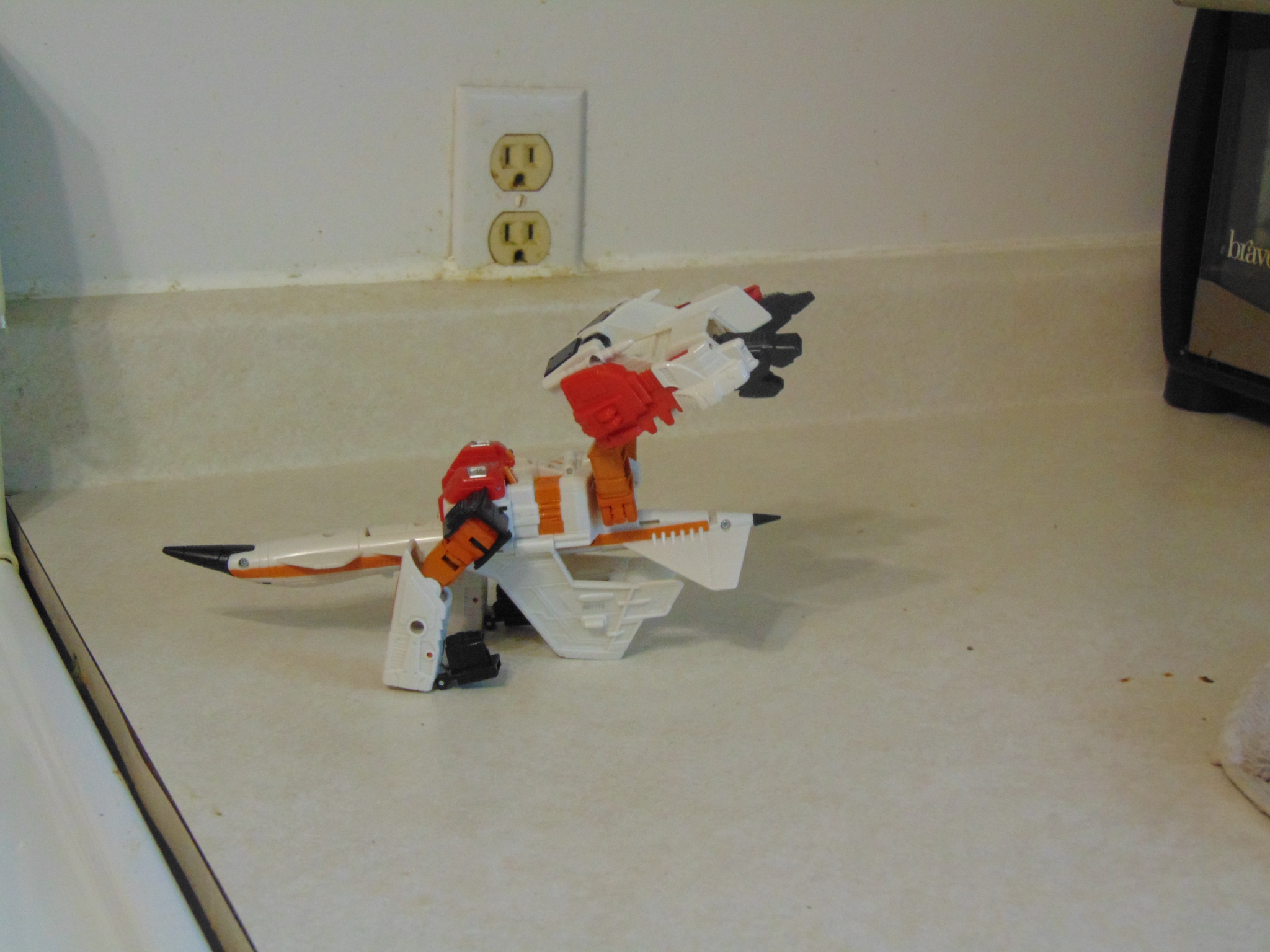 The one thing these guys have going for them is a really solid combined mode. Abominus is definitely more than the sum of his parts. He's the sturdiest combiner I own and probably the nicest lookig too.
Top

The POTP Terrorcons are such a let down it makes me sad. Even Abominus doesn't make me happy (I'll get to that in a bit).
Top

After reading the description the first thing that came to mind when looking at the robot mode was Neil from The Young Ones. Hun-Gurr's got Neils student legs with Mike the cool person's head and shades (only in lurid purple). If only he came with an acoustic guitar accessory he could do 'Hole in my Shoe'

No he couldn't, as that would make The Young Ones rubbish. And that wouldn't be right.
Top
Post Reply
5 posts • Page 1 of 1