They seem to be going all in on these. Lots of character in the sculpts of the non-Grimlock ones (Snarl in particular) but the alt modes aren't great. We don't seem to get these in the UK, at least at any sane price, but it's nice that kids elsewhere have fun options.

Grimlock (loads of them):
https://tfwiki.net/wiki/Grimlock_(Cyberverse)

Want me to have a look? I can probably find them, but the last time I mailed something to the UK (for Matt, I think), the postage rates seemed to have jumped.
Top

Nah, it's alright thanks. Amazon US is generally an option and they deal with the customs stuff but I think in hand most of the Cyberverse stuff is likely to be a bit disappointing and (unusually for TFs, Animated is the only other time it's really happened) somewhat out of style with other figures.

I'd totally have picked up a Seismic Stomp Grimlock (and regretted it) if they'd bothered to release them over here, though.
Top

I suspect that like all the Cyberverse figures I've picked up, the designs and packaging will be nicer than the actual figures. Bit of a shame that Cyberverse seems to have a budget of nothing, so the toys are hollow and basic, but they somehow cost as much, if not more, than the Generations stuff aimed at moaning old farts like me.
Top

I'm looking forward to that Snarl. My MP Grimlock is currently commanding Energon Swoop, Bayverse Sludge (G1 colors), and Animated Slag (offically names Snarl, but it's the triceratops). He's been needing a stegosaurus Snarl for a while now, and this one looks good. Actually, Sludge and Slag look good too.

Seismic Stomp Grimlock is not to be regretted. The colors are great. The gimmick doesn't get in the way of the figure. The T-Rex is a bit oddly proportioned, but that's true of many Grimlocks. The only real downsides are the kiddie-toy level of articulation, and the dino mouth can't hold a 5-mm flame effect like Kingdom Megatron can.

I regret Cyberverse Deluxe Grimlock a bit. He's too small, especially for a character that's one of the larger cast members. There's minimal paint apps, leaving the shins entirely unpainted. The colors that are there seem a bit muted or faded. He's really only worthwhile for the crown and flame effect accessories.
Top

It was the same with nu-RID Grimlock, far too small until bootleggers upscaled it to voyager class (and some of them added die cast parts). On the whole, I prefer figures to not be too large and hide odd design choices, but too small is definitely a thing.

I did mix-and-match with voyager scale 3P dinos (the leftovers were a slightly goofy looking Toyworld Snarl, which with a Hero Mashers Slug/Slag are the "Dinobot Hunt" portion of the back of a display) -- in retrospect the POTP Dinos were also too small to be much fun. Skipping the studio series stuff because whilst surprisingly nice for cartoon-oriented decos they're into MP size territory and take too much space / would be competing with the Fanstoys ones, and those are still my gold standard for chunky original series style Dinobots.

It's not that I dislike the Animated style, and did re-buy a Grimlock fairly recently, but it's one of the few lines that looks kind of out of place next to others.
Top

Got the four that weren't combiners at acceptable prices and blue POTP Swoop will do nicely for the other one.

Like I say, there's a lot of character there. Grimlock is kind of scrawny, particularly from the low angle of the photo, and missing a face plate whereas it feels like they conspicuously went heavy on UK retro comics-style for three of them? Slag and Sludge did turn out better than Snarl in the end. I tried the Chomp titanmaster face on Grimlock but it's a bit too oversized for the frame, Snarl has a stupidly large accessory just sticking off his back, and Sludge really benefits from ripping out the energon armour gimmick with superglue to hold his back plate on and some friction added to the hip ball joints. I turned the leftover armour into a shield he can hold but that bit's still as rubbish as Grimlock's club/whatever... he's fine just twatting opponents with his tail.

It's nice that they feel like individuals, even though it's partly due to being spread over various waves and tooling budgets. Snarl in particular feels like he got shortchanged on plastic... but again, it gives some individuality. 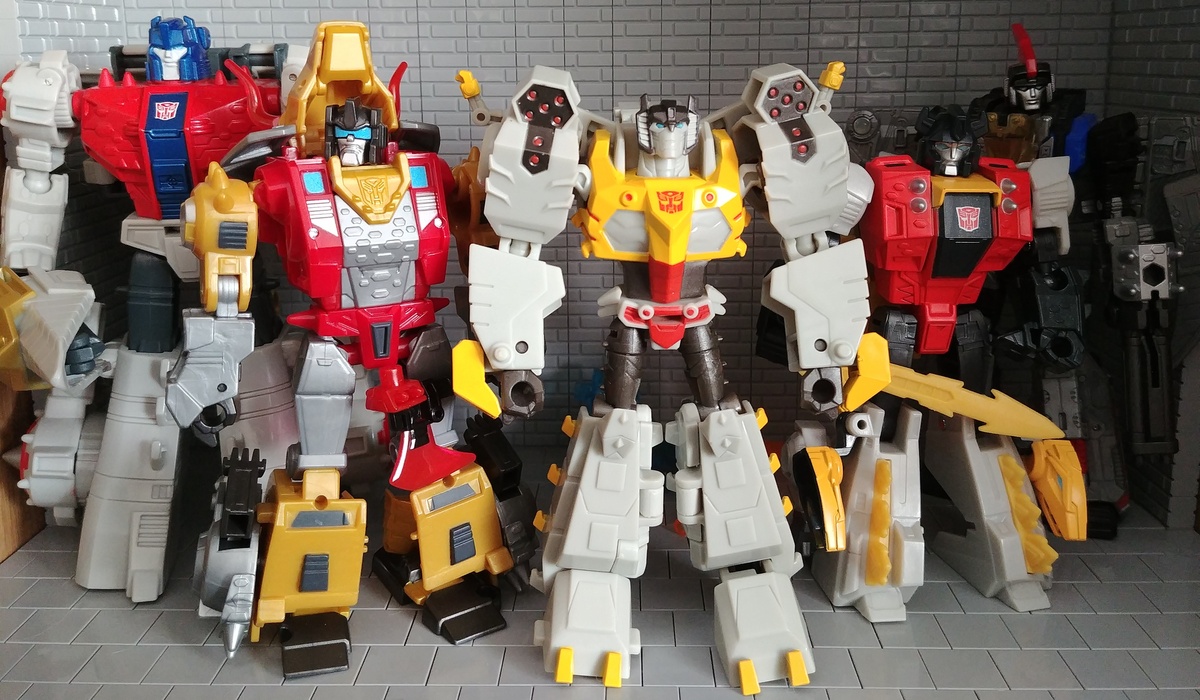 Thanks for posting the group shot! It's too bad they never made a Swoop in that style to complete the set, but the four that they did make look pretty cool together. I like how they each have their own slightly different style, but they're still really obviously Dinobots.

Snarl has a cool Actionmastery vibe that I think you mentioned before, but it's really too bad that they don't actually do anything with his tail. The big, prominent unpainted Autobot symbol on Slag is...well, typical, predictable Hasbro, honestly. But I love all the gold, and the chest detailing. And Sludge looks neat with the neat Marvel colours.
Top

They help to redeem the disappointing by-the-numbers undersized deluxe class POTP Dinobots a bit -- dino modes for those in front of the Cyberverse robot modes. Hopefully I can find the KO Warbotron Grimlock I had (the one that came on a sprue as a kit), it's bigger than the original 3P and will probably work better than the Cyberverse.
Top
Post Reply
9 posts • Page 1 of 1