G1 Sandstorm - Good condition, a bit of sticker, but otherwise complete and only a little loose.
Top

Found Blitzwing and Skipjack yesterday. Blitzwing's neat enough. Skipjack's great, and helps the color balance of Devastator quite a bit. Not wanting to leave out Rampage, I worked out how to attach him to the back for a bigger hump. Since movie Devastator's supposed to just be made out of whoever's around, I added in ROTF Dirtboss to Scrapper to help even out the arms, too. He actually clips onto what makes Scrapper's right hand really well, but Dirtboss is so loose and floppy that he won't stay connected without help from a twist-tie. I suppose I could tighten up the joints with nail polish, but the tether is simpler.

I want to get ER Scorponok but haven't any luck on finding him at retail price.
Top

AU Optimus came from a friend in the Australian Transformers club, while the seekers came from overseas, unfortunately Dirge is missing his canopy piece, so I'm going to try get a replacement part.
Top

So yes, I ordered the Centurion Drone, not because I really wanted a silver version of Brunt(although I have to admit, he’s kind of cool. If I had 10 more of him and a green Trypticon I could make a Godzilla fan film), but for all the extras. My Earthrise Op now has his proper ion rifle(although it seems a bit out of scale. Is Prime’s rifle supposed to be as long as his leg?), while Roller is now sitting quietly in the trailer with the Earthrise Op’s rifle mounted. The energy axe went back in the box because as neat as the idea is, the way I’ve got him posed means the axe just looks out of place. And Siege Megs can’t hold the energo-mace, so either it’s supposed to go on the Earthrise Megs, or the pose is just too thick. The rest of the weapons are nice, although they could have painted the gun mode Shockwave. All in all, a good set.
Top

Keeping me company whilst working... I'm not much for the cartoon but do love the movie and wanted a toy of this since I first saw it. Much nicer than the promo pics make out and even though the transformation's a bit of a cheat. Also, take care with the small arms, they're soft plastic and the joints they're on are stiff enough I almost broke them. 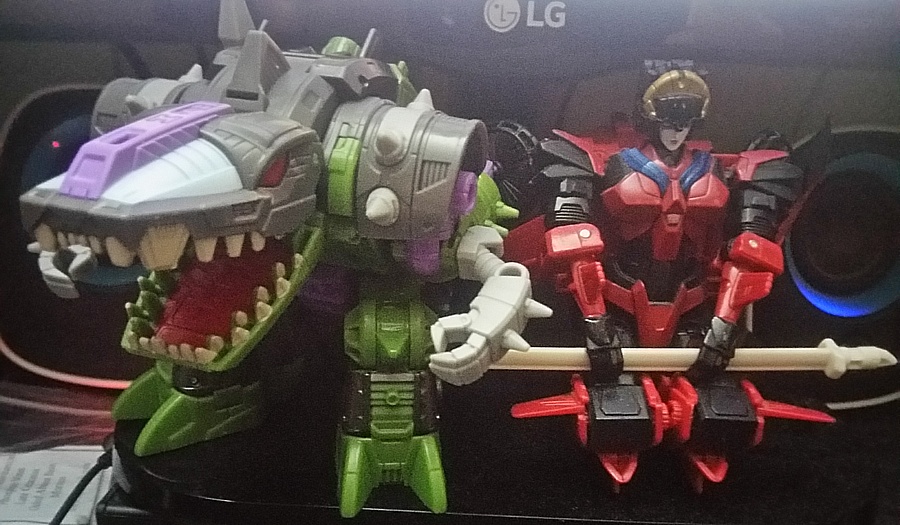 I won the Decepticon clones pack in a competition.

They're definitely worth what I paid for them.

Which is a bit harsh, they're fun. Just basic.
Top

WFC: Siege Netflix Mirage and Scrapface
Due to the pace and scale of reveals and hype, these feel rather old hat now, although they're new to me. Sigh. Collecting's a funny game in the age of the pre-order. Anyway, these are really quite lovely. Scrapface looks great with his strange grimy mix of dark grey and rust red, accented by some metallic blue, bright white and jam red. This and the Reflector 3 pack have really done wonders for this basic and simple mould. Love it. Alt-mode even looks like something in these colours. Decepticon Mirage is properly new to me and he is pretty cool. The colours are nice, although they make him look very murky and smudgy, which you wouldn't expect from someone hoity-toity like Mirage. I like the robot mode, although the lower legs seem a bit messy to me as they're made up of compressed car parts. Alt mode is pretty good, although the cockpit lacks definition - proper rocks the attack mode look though.

WFC: Earthrise Snapdragon
An absolute favourite of mine when I was young. The original toy was fantastic and I looked after that so well, I got a good swap for him in 1990 ish, netting Groove, the Combaticons and The Decepticon Sports Car Patrol. Over the years, I've missed the big lug and briefly reacquired him in 2007 before selling him on and now I have this spiffy 'update'. It's not much of an update - apart from a decent range of movement at the hips and a head that can turn, he's not that much more fancy. The alt-mode spacecraft is a bit slicker looking and the dragon mode is fun. Like a lot of these G1 re-done figures, he's the same but more bendy. I am pleased he's turned out so well, compared to poor old Apeface.
Top

Siege Crosshairs and Sideswipe from Marshall's for $13 each. I'd seen reports that other discounters had them for $8 each. But, it's still a good deal, and I hadn't got any new TFs since Wildwheel in early August. I already have the first responder decos of these molds, so they won't be that new to me. But, Ratchet's battle damage just looked like dirt, and the vehicle mode was kind of bland, with the only memorable detail being the hollow feet sticking out the back. Crosshairs' clean deco looks better, and there's some color variation in the altmode to distract from the flaw.
Top

WFC Trilogy Quintesson Pit of Judgment - I acquired this from a club group buy, nice looking interior with with the toys assembled like how the scene played out in the movie.

BW TM Airazor, Silverbolt, Air Hammer, Scorponok, Terrorsaur, Insecticon, TM Cheetor, TM Tarantulas - I bought these from a guy in the club, all complete with with instructions.
Top

Legends Tracks
Takara version of RTS Tracks, which has a nice metallic sheen and a less mental flame tampo. Mould holds up well, although I still find getting the back of the vehicle aligned right a royal pain. Only thing I still don't like are the piddly little wings. The rather wide vehicle mode does also mean Tracks looks a little podgy in robot mode. Because he's a snooty fellow, I imagine this is because he has gout.
Top

Earthrise Allicon - For some reason my Amazon order has been split up between three items, this is the first part.

Cyberverse Deluxe Arcee - My first retail purchase in months after coming out of a months long lockdown to beat COVID-19.

Earthrise Smokescreen: Is this the first toy that was actually made to be Smokescreen first and foremost? I think it might be! The Alternator is probably the other one that comes close, but that one was really made to be an Impreza first and foremost and it was just a stroke of luck that it made such a good Smokey. Every other toy the character gets, it's the third or fourth repaint of a mold that was (usually) built to be Prowl first. If he's lucky he might get a new head, but TBH that just doesn't work very well for a character like Smokescreen. The chunky animation-model head on the reed-thin Siege Smokescreen just looked silly. Even the Masterpiece really doesn't do a very good job of looking like Smokescreen-the-character, because Smokescreen's character model is so different from the other Datsuns that you need to go all-in to replicate it. He's short, stocky and chubby, nothing like the more traditionally heroic proportions of Prowl or Bluestreak...kinda goofy-looking, if we're being honest.

This toy is the first time that Hasbro has actually fully embraced that goofiness, and the end result is honestly great. It's the same basic toy as any of the four other modern Datsuns you probably already own, and even without handling it you probably know how it'll transform and articulate. But the robot mode is stubby-looking and the car mode is slick, and it's every inch Smokescreen's 80s character model. Smokescreen is very poseable, looks great in both modes and it's a lot of fun to transform. Totally worth the money, as long as you don't want to display all three Datsun characters using the same mold (because the inevitable Bluestreak and Prowl redecos look a bit wrong just like Smokey has all these years when he was repainted from them).

Earthrise Airwave: I'm of two minds about this guy. He looks cool, and his subgroup is the closest thing to a New Idea in the main line in years even if he's technically based on an accessory from G1. He fits together better than any of the Siege Weaponizers I own, to boot, and his base modes all look cool.

So it's really too bad that he fails utterly at accomplishing his stated purpose, isn't it?

This guy is supposed to be a base for Micromasters, but he's just too small. He's not THAT much smaller than the original, I suppose, but he's small enough that every mode is just a tiny bit too small when you try to have it interact with a Micromaster. His "gun emplacement" mode is too small to comfortably fit a Micromaster inside, his "airstrip" mode is so narrow that the Air Strike Patrol's wings don't fit all that well, and his "mini-Metroplex" mode only really has room to park a single jet on the deck. He really needed to be a Voyager for the gimmick to work properly, I think.

He's a nice standalone Decepticon generic, but as a part of the Micromaster play pattern he fails to deliver. And as part of a makeshift base with Omega Supreme and my handful of compatible base-bots, he really comes off as insignificant. I mostly bought him for the former, but I'm still disappointed that he can't pull off the latter.
Top

Amazon Exclusive Transformers EARTHRISE Autobot Alliance Ironhide and Prowl: I preordered as soon as I could, and boy, is this set a mixed bag.

First, the box. Every other time I've gotten a figure from Amazon, be it a Transformer or not, they've put the box the figure comes in inside another box. This time? They slapped a couple of labels on the artwork(which I really liked the looks of I the reviews) and shipped it that way. One of the labels came off easy, the other didn't.

Ironhide:. The one I was really looking forward to..... Is kind of a letdown. Part of it is how well the Siege version knocked it out of the park. Don't get me wrong, the Earthrise Ironhide is as good as the Siege version(in some cases better. None of the leg pieces have come off or show any signs of doing so), but in trying to make a G1 vehicle mode, they kind of dropped the ball. The vehicle mode proportions are off. And after the amazing job they did with Siege, the Earthrise version just feels..... Average. I do like the shield, though. If nothing else it's a neat if slightly awkward idea.
Top

Combiner Wars deluxe Groove - Won him through an auction on Facebook.
Top

Earthrise Airwave - Ordered from Amazon weeks ago but was stuck delivery limbo for a week.

Animated Shockwave & Wreck-Gar - Won via a auction on a Facebook page.
Top

Got an original Geoff Senior Requiem of the Wreckers page and am very chuffed: