The test shot kind of reminds me of EJ Su with a few more exposed parts, which isn't a bad thing at all.
Top

Warcry wrote: Making them heavily detailed with lots of visible mechanical parts was probably unavoidable, but turning them into monstrous-shaped, colourless whorls made up entirely of spikes, greebles and tin foil? Nah. Bay just thought it would look cooler that way.

Yeah, I think a lot of it was style, but nothing about the above toy really contradicts what Bay was saying. Basically, the more big, unbroken car parts the design has, the better your brain can identify it and say, "hey, I know what that is!". When it comes to rendering a dozen (optimally photo-realistic*, but obviously they're on screen too much for that) cgi models for a full feature, that's not really practical. The Bumblebee movie has, what, three robots on earth? Bee and two decepticons? And another ten years worth of tech and experience behind it? So yeah, the more traditional design for Bee is much more workable, and Prime being full G1 doesn't really mean as much when the only shots he's in are completely cgi bits on cybertron.

I mean, if they were horror films and hid the robots in darkness and you barely saw them, that'd be one thing, but even in the 2007 movie, they get plenty of shots of them standing around in broad daylight.

*the only shots I can remember from the Bay movies that looked photo-realistic (as in, "I can't tell that's not an FX shot, other than it's a giant metal man") were of Bumblebee and Prime in DOTM.

EDIT: Also, I don't actually remember Bay commenting on the G1 designs? But that was so long ago, too... I do remember him commenting about the flames on Prime as a means of breaking up the red because people were whining about that, but I never had an issue with that anyway.
Top

inflatable dalek wrote:I'm still hoping the trailer used unfinished CGI, but I think the Cybertron bit in it kind of prooves Bay's claim, it looks incredibly cheap and nasty, like an escaped computer game cut scene.

I thought this too - 'Bee, Blitzwing and the two other Decepticons look excellent, but those clips on CYbertron look like they're from something else entirely.

Honestly, whilst I agree that the designs under Bay were a bit too busy and silver for their own good, I did appreciate them being different and alien (even if they did lean very heavily towards Hollywood's preoccupation with aliens all being insect-like). I wouldn't expect a bunch of techno-organic robotic lifeforms from space to be the boxy humanoids we got in a creaky old cartoon. I'm always mindful of a line from the first Kick Ass comic series where there's a discussion about Galactus being on the big screen in the Fantastic Four films and one of them goes, 'yeah the swirling space cloud was rubbish but if they'd put in a big guy in a purple hat with tuning forks, audiences would have just pissed themselves laughing.'.
Top

A fourth femmebot combiner limb has been teased for POTP Elita One.

Personally I like to just use Darkwing and Dreadwind to fill out the combined mode, or would if any of them could keep the combiner parts in place. The Starscream/Elita mold is a bit sketchy too compared to Hungrrr and Grimlock. But it's nice for the peeps that want a full autobot team.

In other news, hasbro have apparently won a court case within china against bootleggers/IP theft. Comments in the link seem to be worried that it's harbinger of doom for all non-official stuff, but realistically it's probably just about knock-offs of G1 stuff using copyrighted branding.
Top

This follows the similar success Lego has had winning court cases against a number of Chinese bootleggers. I think the successful cases have been those against companies using designs, branding and are very obviously copies / fakes of obvious Hasbro product - so all those bootlegs of 1980s toys ; The Dinobots, Constructions, the Scramble City Combiners, Decepticon Headmasters, Autobot Cars and so on.

The Lego cases have been interesting, as loads of companies make their own building bricks based on Lego's designs (I'm guessing the patents were up, making them fair game for the likes of Mega Blocks, Kre-O and so on to make their own from the 1990s onwards), but they won their cases where firms like Lepin were directly ripping off the instructions, artwork and designs for products that Lego were selling - their Star Wars, Marvel and Creator Modular buildings chief among them.
Top

As ever it's trademarks and copyright they'll run foul of, and 3P being largely original designs will save those, although Hasbro's probably got extralegal clout with some factories etc.

He seems to come with a "dangling spinal cord bits" accessory too. Pretty cool.
Top

That is pretty cool. They both look very nice. Megatron is particularly impressive, as I never particularly cared for the first movie version.
Top

Jazz can do his little action-pose like in the promotional art from 2007. Neat.

Also, release dates are projected for the fall.
Top

Hasbro has put out some pre-Toyfair info, it seems.

Jetfire looks like he'll be really popular with people who wanted a figure based on the cartoon design. He also seems to be the debut of a new size class. 11 inches tall plus all that armour and gear is a lot of Transformer. Likely not for me, since $80 US (I think I heard $110 CAD) is a lot more than I'd be willing to spend on a Jetfire, but I'm curious to see which other characters might pop up as "Commander class" in the future. I'd be super stoked about an 11-inch Scorponok, even though he seems to inevitably be destined to become a Titan.

Omega Supreme turned out good but (as with all the other Titans) just way, way too big for me to consider. I honestly don't understand how people have room for one of these massive citybots, let alone four. I barely have space to display combiners!

Mirage and Impactor both seem nice, but I'm not in love with either.
Top

Yes, I like TR Trypticon (he makes a nice horse for Predaking) but he has to live in the roof because he's too big. Although I would like a big impractical Scorponok

Those all look decent, Impactor's my favourite out of the bunch (and nice that Hasbro have given him a proper mainstream retail release) although Omega Supreme looks very good, but I'm not a massive fan and am happy enough with the Encore reissue (it does walking! and has a tank that goes around and around and around).
Top

Trypticon was the only one that seriously tempted me -- helped by the fact that he was a bit shorter than Fort Max and Metroplex -- but all the talk of exploding hip ratchets, tails falling off and chests not closing put me off of that idea pretty quickly. I didn't fancy playing QC roulette with a $200+ purchase. And I suppose, like you with your Omega Supreme, I'm still quite happy with my original Trypticon and his walking action.

Honestly, even the original is too big for any of my display cases, so he basically just lives on an end table. Anything bigger than a Leader is pushing it for me, space-wise, and I think Armada Unicron might be the absolute biggest I could go in my current house. I'm glad the folks who want two foot tall citybots can enjoy them, though!
Top

I have all the Titan Class figures, except for Predaking, which I'm just waiting to have some money to spend on him. I haven't really found displaying them to be a problem. I have shelves, the Titan Class figures sit on top of them. It's the cost that gets me. I really wish the Canadian dollar was a whole lot closer to the US dollar.
Top

[I'm starting another thread because I can no longer keep track of which releases are Hasbro or Takara only, which ones are the same for both companies, and which ones would be the same but only get released here or there. Besides, we can order everything online nowadays, so geographical distinctions aren't what they used to be anyway.]

Even more MP10 Convoy repaints (some of which are quite fetching, actually), and pictures of other new Masterpiece figures we've already known about (Beast Wars and Movie Megatron, G1 Hound and Prime 3.0, etc.)
Top

Star Convoy(?) is a surprise, honestly. BW Blackarachnia is neat and welcome, and also means a Tarantulas retool at some point. Bumblebee 2.0 is... why? I liked (but never obtained) the first version, and liked the idea and execution of merging the reality of the car model with the Sunbow animation model more than this strict cartoon adherence, but I guess I'm in the minority.
Top

MP Bumblebee V2 -- kind of looks like a cosplay costume in that promo pic. Prefer the more toy stylings of the V1 myself. 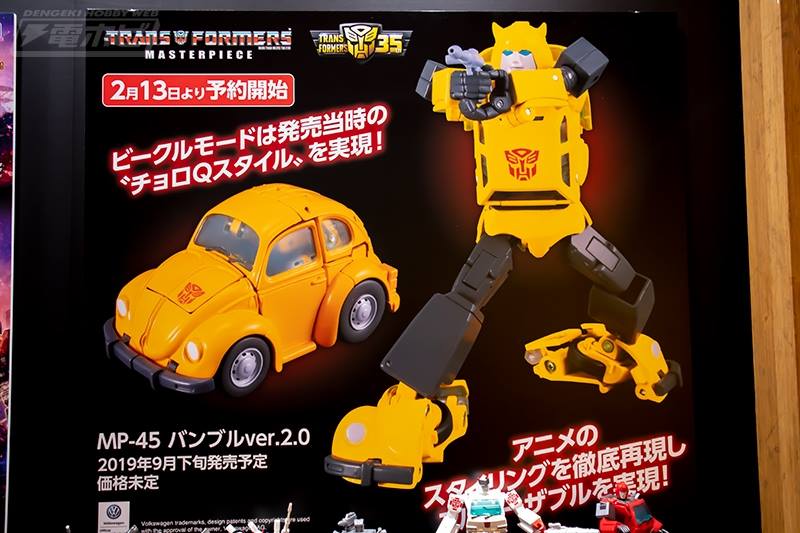 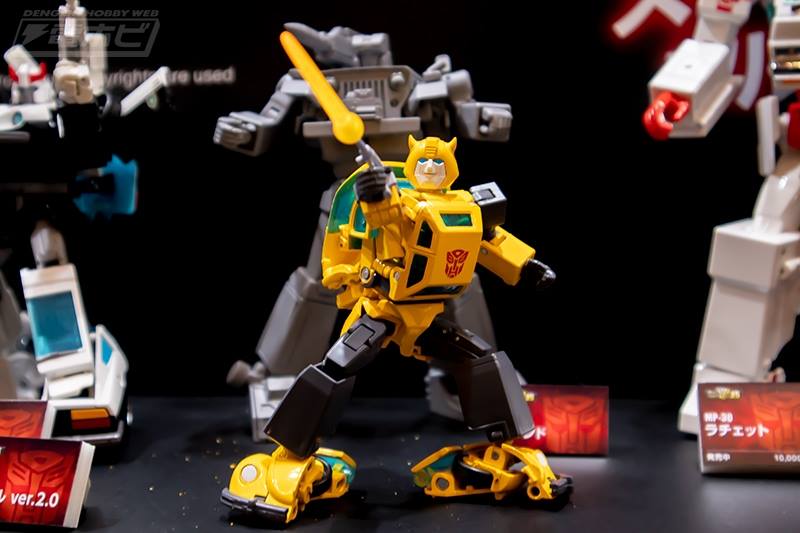 Hopefully Countdown will get parted out by some buyers... not really after a citybot-sized Omega at today's prices, nice as it looks (already got WST-appropriate options).

Likewise already have 3P Impactor and Mirage fills, and Classics Jetfire, but might be tempted in-person (particularly for the novelty of a general-release Impactor) and all look decent. Siege is shaping up to be a competent line.
Top

Star Convoy looks cool, but does he come with a Micromaster Hot Rod?

Yeah, I don't quite get the point of a new MP Bumblebee. I suppose since they're leaning hard on being as cartoon accurate as possible but man do those feet and backpack look crap compared to V1.
Top

If Armada Prime gets a Western release I'd be tempted. Probably not tempted enough to import.

That new Bumblebee is a fantastic illustration of everything that's wrong with the new direction the MP line has taken. The thing probably has twice as many moving parts as the original MP Bumblebee, the feet and torso are nothing but broken-down car parts stuffed into big, hollow gaps and it's going to cost something like three times as much as the first one. And the end result is a robot that looks awful from any angle other than straight on, and an alt-mode stripped of all detail and accuracy. And, bafflingly, it seems like this is what a lot of people actually want?

Blackarachnia looks cool, but I can't see how you could possibly get a Tarantulas out of that. I know the originals shared a mold but the show models are just too different. On the other hand I can't even fathom how the figure they showed off even transforms, so who knows?


Clay wrote: ↑
Sun Feb 10, 2019 5:03 pm
Bumblebee 2.0 is... why? I liked (but never obtained) the first version, and liked the idea and execution of merging the reality of the car model with the Sunbow animation model more than this strict cartoon adherence, but I guess I'm in the minority.

You should think about buying one of the many V1s that are sure to get dumped onto the secondary market by Sunbow adherents looking to, uh, "upgrade". The original MP Bumblebee is a bit simple, especially by the standards of modern MP figures, but it's a good-looking figure and unlike a lot of MPs, actually enjoyable to transform.
Top
Post Reply
1816 posts